You may have picked up on this at some point, but pumpkin is possibly my most favorite flavor. It’s good in coffee, it’s great for dessert, and I recently figured out that it’s perfect for breakfast, too! This recipe is easy-peasy and absolutely delicious! The best part is that you can set it before you go to bed and have warm, fall-flavored oatmeal by breakfast. It’s a win all around!

There is no denying it, fall is my most favorite season of them all (see what I did there?). I love the changing leaves. I love fall weddings. I love pumpkin. I love the cinnamony, spicy smells of fall. I love the sweaters and chilly weather. I love gearing up for the holidays. I love everything about it!  What better way to bring some lovely fall smells and tastes to our home than to make some tasty applesauce? I just so happened to have a whole bunch of apples and a new Crock-Pot that I needed to break in. I made this recipe up as I went and lucked out with some delicious applesauce! Ready for the recipe? It’s SO easy!

If you’d like to make a larger batch, you could try your hand at canning some for later (some on canning tips here and here). 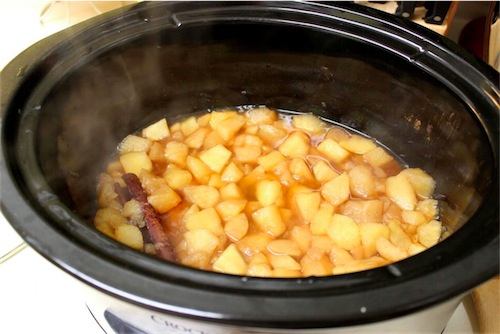 Hope you enjoy this yummy treat!

Today was one of the first “real” fall days around these parts. It rained overnight throughout the morning and was a wonderfully cloudy and brisk day. It was the perfect day to bundle up and enjoy a day at home. Thankfully, I got to do just that! Today’s weather called for a classic fall dinner- chili and corn bread. My goal with this meal was to not have to go to the grocery store, but to be able to use things that we already had. We typically make chili with ground beef, but Mother Hubbard’s Cupboard only offered chicken today. I went out on a limb and basically made up the chili recipe as I went. I’ve never had a chicken chili, but figured that it would be worth a try. I was a bit nervous at first, but then realized that since I knew we liked all of the ingredients, there was a pretty good chance that the end product would turn out delicious. The cornbread recipe (with a few modifications) comes from my faithful friend, my Better Homes and Gardens Cook Book. This entire meal was a cinch to put together and the end products were so hearty and delicious! 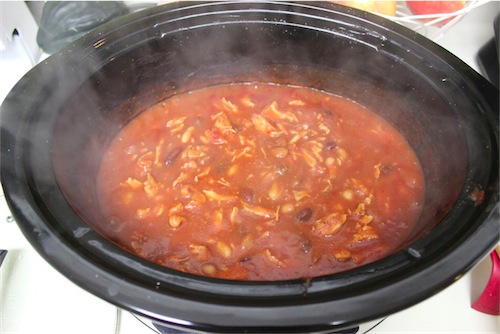 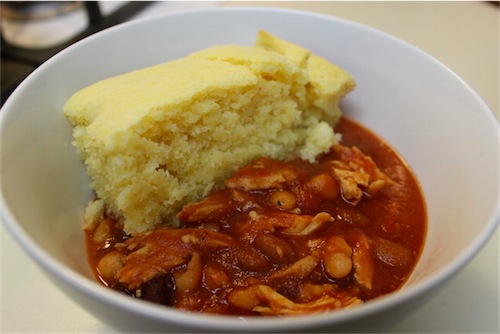 On the menu tonight:

According to my easy-to-please husband, this meal was great!! (he might be biased though)

For the past couple of months, I have made a weekly dinner menu on Sunday, done grocery shopping for only what’s on the menu (plus breakfast & lunch items) and then tried my hardest to stick to the plan! We’ve had pretty good success so far with this, only once or twice have we strayed from the menu to get Taco V (locally famous taqueria) or Pizza ($10 pizzas on Monday at Round Table!). For tonight, I had planned on using the crock-pot to make BBQ chicken for sandwiches, mostly because Josh has been dropping subtle hints about it for about a month :)

I found a recipe on allrecipes.com for Zesty Slow Cooker Chicken Barbeque. Sidenote…allrecipes.com is a-maze-ing. Seriously, you should check it out! I use recipes from there about 3 times a week and haven’t found one we don’t like yet! It pays to read user reviews and suggestions though. Back to the point…I found the recipe for the BBQ chicken, thought it sounded pretty fool proof and dove right in! It only calls for 5 ingredients, how could even I mess that up?! Frozen boneless, skinless, chicken breasts, bottle of BBQ sauce, Italian salad dressing, Worcestershire sauce (I can never ever say that correctly), and brown sugar. Easy, right? Yeppers.

I dumped it all in the Crock-Pot at lunchtime and when I arrived home at 5:30 the house smelled awesome! I dropped my stuff and hurried into the kitchen to see how my potion was brewing. But to my dismay, I found that the chicken looked overdone and the sauce looked way too liquidy…oh no! I pulled the chicken out and shredded it in hopes that it would help it a bit and put it back in the way-too-soupy BBQ sauce with fingers crossed

With high hopes for the chicken, I went to work on the second portion of our dinner, sweet potato fries! Seriously such an easy thing to make! My version started off as this one, found at…you guessed it, allrecipes.com. But, with the help of my Mom, it has morphed into something super simple and super awesome. Our version has just 5 ingredients- sweet potatoes (ok, ok, they’re yams), salt, pepper, olive oil and chili powder. Peel and cut the potatoes into fries, place in a zip-lock bag, add about 2 Tbsp. olive oil, 1 tsp. each salt, pepper, and chili powder. Shake-shake-shake, spread into one layer on a sheet pan and bake in a preheated 425F oven for 20ish min. Flip the fries and cook 15ish min. more. (I say “ish” because it varies to how thick your fries are…just cook ’em until they’re tender and toasty to your liking). Voila! Sweet potato fries! Note: they will be significantly softer than ones you’d get at a restaraunt because they aren’t deep fried. I actually like this version better!

By the time Josh got home, my chicken had redeemed itself! By shredding it and letting it cook for another 40 minutes, I had rescued it from crock-pot death and made something that he loved! It had a chance to soak up some of the liquid and was something I’ll make again. Although, I might do some adjusting to the recipe to make it my own. Stay tuned for that! Back to dinner- we toasted some potato bread buns for the BBQ chicken, cooked up some asparagus and loaded up on the sweet potato fries. SO GOOD! Success!  We’ll definitely be trying this dinner again! Very easy, very tasty, and gives me the satisfaction of a home cooked meal with the convenience of letting the crock-pot do most of the work for me. I see many more crock-pot meals in our future…

Patting myself on the back,

Hello! My name is Terra and I'm a new(ish) wife that is learning the ropes of marriage. I'm crafty, I love to cook, and best of all, I'm married to a bearded mountain man. You're welcome to follow along!